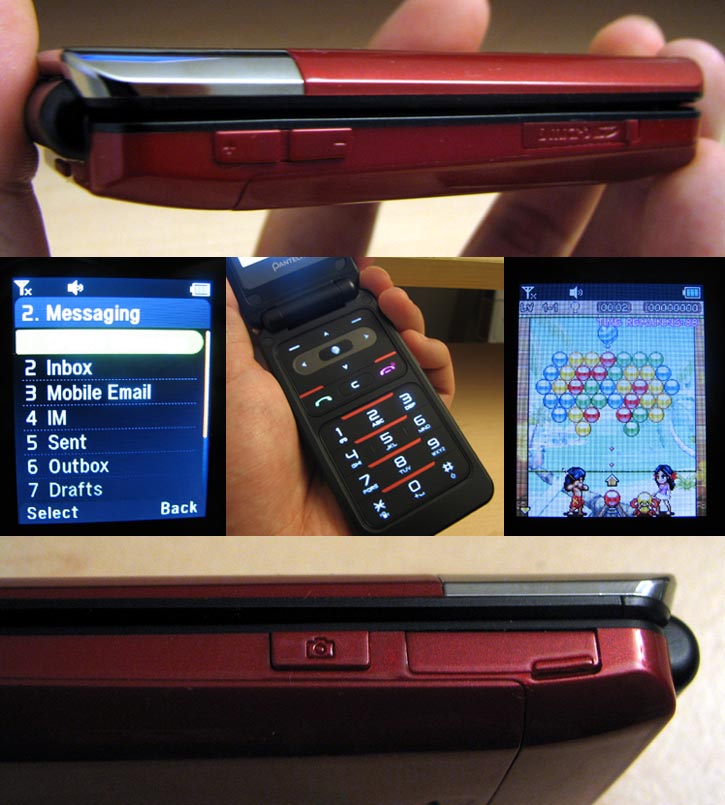 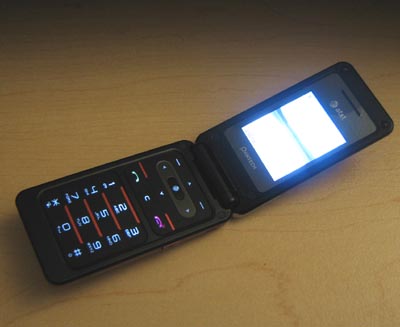 The whole point of the Pantech C610 clamshell from AT&T is that it can offer high-speed 3G functionality in a relatively small form factor. Contrast this to the smartphones in AT&T’s lineup that do the 3G thing and you’ll see how the Flame Red Pantech flip phone is a lot easier on your jeans pocket. Are there sacrifices that are made in not being a smartphone and having a smaller footprint? Read on to find out.

In case you missed the hands-on that I had with this phone earlier this month, let me run you through some of the main features and specifications. More detailed information can be found through the official product page on AT&T’s website.

As you can quite plainly see, the Pantech C610 has an entry-level appearance to it. The flip phone, if it wasn’t for the 3G connectivity, would give you the impression that it was one of those “free with contract” handsets. In fact, if you’re willing to go through a two-year contract and a mail-in rebate, this Pantech clamshell can be had for just $49.99. That’s pretty close to free with contract.

With a reasonably slim profile, this flip phone surely beats the RAZRs of old. You get an integrated music playe that will handle MP3, AAC, AAC+, WMF, and WAV audio files, as well as access to AT&T Mobile Music and support for both eMusic Mobile and Napster Mobile. Rounding out the multimedia end of things is a customizable equalizer, music playlists, visualizer, and MusicID. Most of these sound like par for the course, right?

I didn’t really have high hopes for this phone going in, but I’m pretty happy with the choice of materials and the build quality. The Pantech C610 may be a budget-minded phone, but Pantech didn’t skimp out by using cheap materials and shoddy workmanship. The exterior casing is primarily plastic, but there is a certain hardiness to it that I represent. The Flame Red color scheme adds quite a bold touch of personality and you can tell that AT&T is probably targeting the female audience with this color scheme. There is definite weight to this phone, so it doesn’t feel cheap (but it may weigh you down).

The chrome accent near the top of the top cover adds more style to the entry-level phone. The chrome also surrounds the 1.3 megapixel camera. I would have liked to see a higher resolution camera — at least 2 megapixels — seeing how it’s pretty cheap to do that these days. If Samsung and LG can pump out phones with 5 megapixel shooters, an entry-level shooter from Pantech should at least be able to do 2 megapixels.

Along the left side of the phone, you’ll find the volume rocker buttons and the covered microSD memory card slot. I found the flap for the memory card slot to be a little finicky at times, but it’s great that Pantech is providing access for hot-swapping memory cards. I’ve seen far too many budget phones that hide the microSD card slot behind the battery. More still lack expandable memory altogether. Having a covered slot also means that you can largely keep the dust and dirt out of there as well. Along the right side of the phone is the camera shutter button and a covered slot for the proprietary charging port. Nothing too out of the ordinary here.

The menu system on the Pantech C610 is, again, pretty much par for the course. Opening the menu, you are presented with a 3×3 grid that walks you through the different functions: AT&T Music, Messaging, YellowPages.com, MEdia Net, MEdia Mail, AT&T GPS, My Stuff, Address Book, and Settings. Accessing the menu from the main screen is done by hitting the right soft button. I would have preferred if this was mapped to the center key on the five-way navigator instead. As it stands that is used for accessing the mobile web. I guess this has to do with the 3G focus of this phone.

Because the numeric keypad and other controls are flush, getting good tactile feedback on the individual keys is a bit of a challenge. Even so, the little grooves in between each row provide enough that you can hit the buttons based on feel. Not that I’d condone dialing while driving.

You have to go in with the right expectations. If you’re looking at the Pantech C610, it’s not exactly fair to compare it with other 3G phones like the iPhone 3G and BlackBerry Bold. When you place this budget-minded clamshell against other entry-level handsets, you can see that it easily holds its own. The camera isn’t the best, but you do get a music player, navigation, and 3G speeds. You probably won’t notice much of a difference surfing around on WAP sites and using that tiny screen though.

For what it is, the Pantech C610 is perfectly decent. Just don’t expect anything close to the world from it.