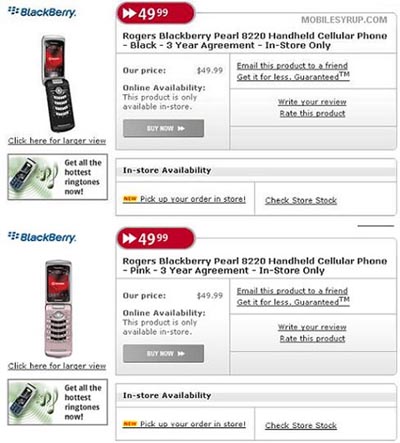 Rogers has yet to make any formal announcement regarding the availability of the BlackBerry 8220 Pearl Flip, but that hasn’t stopped Future Shop from letting the cat out of the bag. Just as they jumped the gun on the HTC Touch Pro with Telus, Future Shop is letting a little something slip about RIM’s first flip phone.

According to the Future Shop website, Rogers Wireless will be offering the BlackBerry Pearl 8220 for just a penny shy of $50, assuming that you’ll latch yourself to an appropriate three-year contract. This pricing is right in line with many early estimates, but it probably wouldn’t be all that unexpected if the contract price jumped to around $100 closer to launch.

You’ll also notice that the Future Shop listing shows the Pearl Flip as only being available in-store. I have a feeling that if you waltz into your local brick-and-mortar that they won’t have this on display just yet. But they will soon.