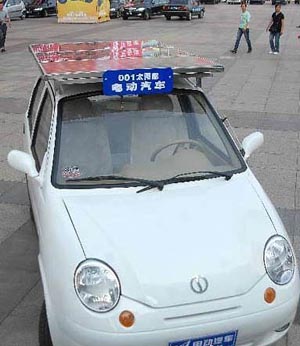 A big part of the political debate between Barack Obama and John McCain involves reduction (and elimination) of America’s reliance on foreign oil. They talk about things like clean coal technology, offshore drilling, and so on. One other possibility comes from our friend the sun.

Based out of Zhejian province in China, 001 Group has created a car that is powered solely by the solar panels on its roof. There is no need to visit the pump or plug into the wall for an electric charge. Better still, the car only costs $5,500.

Don’t expect to get very far with those solar panels though. It takes a solid 30 hours of charging to get a mere 93 miles. I’m assuming that any occlusion (smog, buildings, etc.) would reduce this number even further. Also, they say that while the car can absorb 95% of the sun’s rays, only 14-17% is actually converted into usable energy.