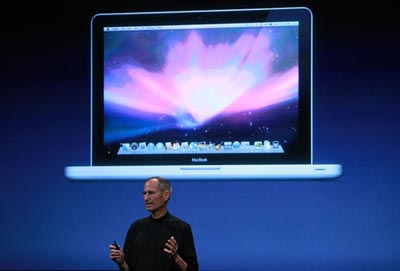 When Steve Jobs took the stage yesterday to unveil a new generation of MacBooks and MacBook Pros, there was one very notable feature that was missing from the list. Yes, the new MacBooks are made from the aluminum “brick” manufacturing process and they have glass multi-touch trackpads, but what about Blu-ray?

Leading up to yesterday’s event, there were rumors swirling around saying that Apple would start integrating Blu-ray drives into their notebook computers. Instead, the new MacBook and MacBook Pro are both sticking with the SuperDrive route. Why has Cupertino decided to cast Blu-ray aside? Why did Steve Jobs call Blu-ray a “bag of hurt”?

The argument coming out of Crunchgear is that the average Apple consumer has no need for Blu-ray in a notebook. You really can’t see the difference between a regular DVD and a 1080p Blu-ray movie when you view it on a 13.3 or 15.4-inch screen. The difference is fairly minimal until you start looking at a bigger screen and, at that point, you’re using something other than your notebook anyhow. That is, unless your laptop also happens to be your only DVD player.

By taking Blu-ray out of the picture, Apple is able to keep costs down (relatively speaking) and keep the package simple. This doesn’t mean that Steve Jobs will eschew Blu-ray altogether, because those drives certainly have a place among desktops, wouldn’t you say?