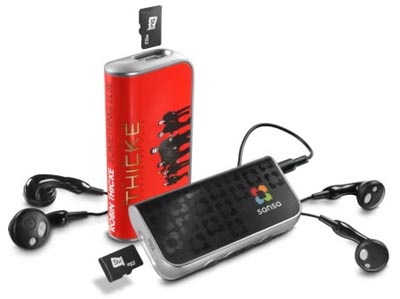 Some time ago, SanDisk announced a line of microSD cards that would come preloaded with music right out of the box. It only makes sense that SanDisk would, in turn, create music players that accepted this new format. That day has come with the arrival of the SanDisk Sansa slotMusc MP3 player.

As you can probably imagine, this relatively budget-minded portable MP3 player has a microSD memory card slot that accepts the new slotMusic memory cards from SanDisk. Although it isn’t stated explicitly, I can’t see why you can’t use regular microSD cards as well, granting you access to however many tunes you can shove into that fingernail-sized memory card.

The Sansa slotMusic Player is available with artist co-branding from Robin Thicke and ABBA, if that’s your kind of thing, but I think regular ones are available as well. The special versions come preloaded with a 1GB slotMusic card, presumably with tunes from Thicke and the Dancing Queen.

The unbranded versions sell for under $20, whereas the branded players (with the bonus 1GB card) sell for $35. Look for them at Best Buy and Wal-mart.