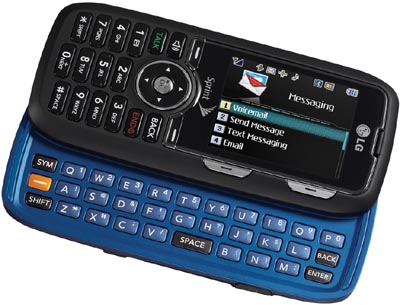 Even though I don’t use my Windows Mobile smartphone for mobile email or web surfing on the go, I don’t think that I would ever be able to give up the QWERTY keyboard. While there are certainly some people out there who are just as speedy with T9 or SureType, I just have a super heavy preference for QWERTY. Whether it be sending text messages or inputting information into the calendar, the full QWERTY keyboard is just so much more intuitive.

At the same time, I think it’s fair to say that the average consumer doesn’t want to fork out the big bucks associated with a suitable data plan. Sure, the Apple iPhone and devices like it have opened up the field for consumer-minded data plans and smartphones, but there is just something to be said about having a simpler phone. By and large, smartphones cater to the business and corporate world, so consumers just want a more familiar and simpler experience. There are exceptions, but that appears to be the general trend.

Yes, you’ve got devices like the BlackBerry Pearl and Palm Centro that are clearly targeting the average consumer, trying to provide a low level of entry into the realm of smartphones. At the same time, the average consumer simply cannot be bothered with learning the ins and outs of Windows Mobile, Symbian, BlackBerry, Palm OS, or maybe even Android. They just want a phone with a camera and a music player.

Even if you have little interest in paying for a full data plan, there’s a good chance that you send a text message or three. After getting accustomed to the QWERTY keyboard on my phone, I have such a hard time being as fast on a regular numeric keypad. T9 is great and all, but it’s just not as intuitive. If you send a lot of text messages, you want QWERTY.

Touchscreen phones like the Samsung Instinct and HTC Touch Diamond try to provide this through an on-screen virtual keyboard, but I prefer the true tactile feedback of a physical keyboard. I’m not alone on this, I’m sure. That’s why I find it somewhat surprising that there aren’t more QWERTY-equipped dumb phones (sorry for the lack of a better term) on the market.

When I say dumb phone, I don’t mean to insult your intelligence. I simply refer to all the phones out there that aren’t smartphones. These are the RAZRs of the world, the phones that appeal to the mass market. We’ve seen a few “dumb” phones with QWERTY, but they’re few and far between.

You’ve got devices like the LG Rumour and Samsung U740, but where are the rest of the options? Up until recently, the GSM world has been largely left out of the mix too. If it wasn’t for the Samsung Propel, Samsung Gravity, and Pantech Matrix, I’d say that the QWERTY dumb phone was largely restricted to CDMA.

The Sidekick has been and continues to be popular with T-Mobile. The HipTop worked with Fido in Canada, but a similar option has not opened up for the dog since they ditched that flipping QWERTY wonder. It wasn’t quite a smartphone, but it had integrated instant messenger support and a great QWERTY keyboard.

Another Entry Point for Smartphones

While gadget geeks like me love dramatic change — that’s where a lot of innovation comes into play — the mass populace is a little more hesitant. It’s about baby steps and I feel that the market is slowly moving away from just regular old phones. People use their phones to send a lot more text messages and emails than ever before and a regular numeric keypad just doesn’t cut it for that purpose.

I hope that touchscreens get better and that they better simulate the experience of a physical QWERTY keyboard, but until they do, I want my real keyboard. I don’t see why more manufacturers don’t produce more “dumb” phones with QWERTY. By doing so, you can open up all sorts of functionality and user-friendliness. From there, it’s a stone’s throw into smartphone territory and that’s when the manufacturers start making some big bucks with their pushing-the-limit innovations.

Not everyone loves BlackBerry and Windows Mobile, but we do love connectivity. And QWERTY can play a big part in that.