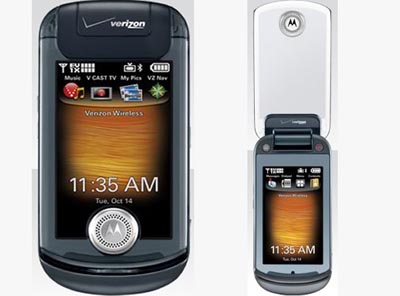 If you think that the new Motorola Krava ZN4 looks familiar, you’re probably thinking of the Linux-powered MOTOMING smartphone that was released many moons ago. While I don’t think the Krave will be able to be quite as competitive in the market as the HTC Touch Diamond, Samsung Instinct, and Apple iPhone 3G, it does provide a touchscreen alternative.

Now up on the Verizon website, the Motorola Krave ZN4 is marketed as “the first interactive clear flip full-touch phone.” As you can see, the main difference between this phone and other touchscreen-equipped handsets is that the Krave ZN4 has a clear cover. This should help to keep out some fingerprints and some unintentional taps. They say that it’s not a true smartphone, but it’s pretty close.

Other features on this $149 (with contract and MIR) phone include a 2 megapixel camera, 2.4-inch QVGA haptic touchscreen, 3.5mm headset jack, HTML web browser, and accelerometer.