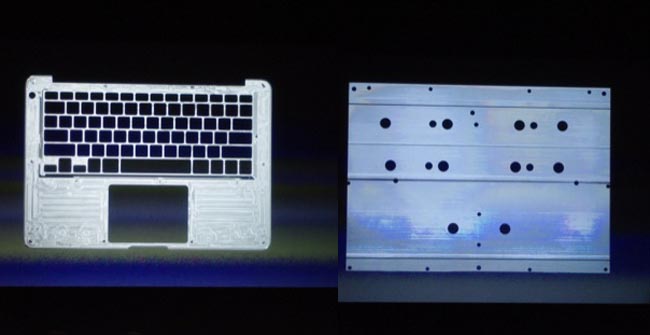 There has been some word floating around on the Internet about a MacBook Brick that Apple is bandying around and now the Jobsian one has come out with an official explanation. No, the MacBook Brick doesn’t join the MacBook, MacBook Pro, and MacBook Air as another notebook variant. Instead, the Brick explains a new manufacturing process.

For MacBooks up until now, Apple has taken aluminum sheeting and added layers to it, tacking on a frame for sturdiness. With the new “Brick” manufacturing process, the entire shell is carved out of a single block of aluminum using lasers. This eliminates the need for an internal frame and presumably adds a little more ruggedness as well. The Brick starts out as a solid 2.5 pound block and gets cut up until it looks like a laptop shell. This process also reduces weight.

The process was originally developed for the MacBook Air, but it has now filtered down to both the regular MacBook and the MacBook Pro.