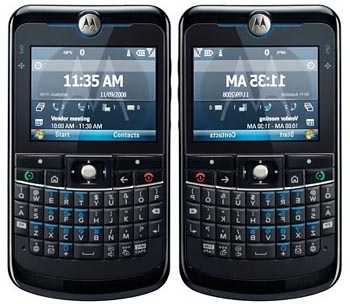 We’ve seen all sorts of spy shots and leaked photos, but now Motorola has finally gone on the record to officially announced the Motorola Q11 smartphone. Naturally following the footsteps of the original MOTO Q and Motorola Q9h that preceded it, the Motorola Q11 doesn’t really bring much in terms of “new” to the picture.

The Motorola Q11 smartphone is powered by Windows Mobile 6.1 and it gets its data via the GPRS/EDGE connection. What’s that? No 3G? It’s almost a step back from the Q9, but at least Moto decided to include Wi-Fi for this QWERTY-packing mobile. Rounding out the specs are a 3 megapixel camera with LED flash, microSD memory card slot, 64MB RAM, Bluetooth 2.1, integrated GPS, and a QVGA display.

You can expect Motorola to start shipping the Q11 in December.