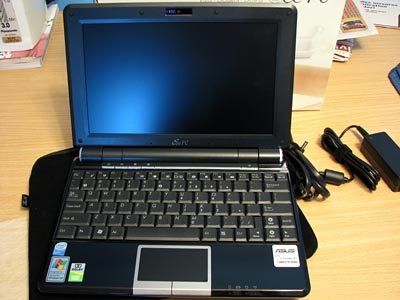 When notebook PCs first emerged on the scene, people thought that it was incredible that you could have a fully functional computer that also happened to be portable. Yeah, the specs were nowhere near what you could expect from a much larger desktop computer, but the portability was a major plus.

The specs on today’s laptops are getting a lot closer to what you can do a desktop. You’ve got notebooks with powerful dedicated graphics cards, up to a terabyte of storage space on a hard drive or two, and even gigantic displays that rival even some standalone LCD monitors. But what if you don’t want something so big, so heavy, and so expensive?

The netbook market has largely addressed this very issue and you can probably give most of the credit to the original 7-inch Asus Eee PC for popularizing the format. Since then, we’ve seen several offerings from HP, Acer, and even Dell. Asus is not about to have the spotlight stolen away from it, however, and that’s why they’ve continued to upgrade the line with better features and increased functionality.

And that’s where the Asus Eee PC 1000H comes into play. I first saw this thing when it was officially unveiled at Computex Taipei during the summer. Most people knew that the announcement was coming, but it was another thing altogether to see the subnotebook in person and officially demonstrated by Asus head honcho Jerry Chen. He found it, man!

As you know, announcements and unveilings are not necessarily followed immediately afterwards with a launch. So, it took some time before these notebooks were made available for public consumption and even longer for them to emerge on the North American market. It took some hullabaloo, but the new Asus Eee PC 901, 1000, and 1000H are finally available in Canada and United States in a reasonably reliable fashion.

I was lucky enough to receive an Asus Eee PC 1000H to toy with and a full review is scheduled for FutureLooks, Before I give the subnoteook its fair shake against competitors like the MSI Wind, I figured you guys might enjoy an unboxing.

I find it a little strange that the exact same packaging is used for several of the Eee PC models. There’s nothing wrong with having similar boxes,but when the only differentiating factor is a sticker on the side, something’s got to give. This has got to cause some havoc at retailers, because it’s not immediately apparent whether you’re grabbing a 10-inch Eee, a 9-inch Eee, or something else.

The included accessories are quite nice and they come as quite the bonus. The included sleeve, much like the ones that preceded it for older Eee PC netbooks, is a very good idea. It may not be useful for carrying the Eee on its own, but it’s great for protecting it while it bounces around in your backpack. The cleaning cloth is different than what I’ve seen, because it’s textured. I’m used to cleaning cloths that are smooth like those that come with glasses and sunglasses.

In terms of first impressions, I very much enjoy the Asus Eee PC 1000H over the older 7-inch models. The chassis is larger, for sure, but this accommodates a better display and a much more comfortable keyboard. I dislike the placement of the right shift key, however, as I find myself tapping the “up” directional arrow instead of it when I need to capitalize a letter.

Battery life appears to be incredible. There is a built-in performance manager that can swap between high-performance and power-conserving modes, but I just left it on “Smart Mode” to let it decide what is best on an on-the-fly basis. As it stands, it seems like the pack-in battery will give me a solid six hours of Wi-Fi web surfing and other general tasks. That’s really good, especially when you compare to the two hours I got out of the Wind and its 3-cell battery. The price for this, of course, is that the unit is a fair bit bigger.

Although the size is still smaller than most conventional notebooks, the 10-inch Asus Eee PC 1000H is getting awfully close to small notebook territory. Asus has a few 11-inchers that are much more powerful than the Eee, but I don’t think I would ever opt for anything much smaller than the 1000H unless I wanted a UMPC/MID instead.