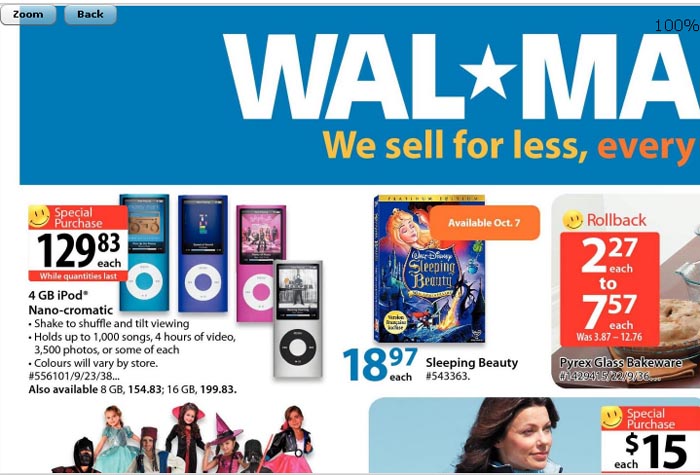 I got pretty confused there for a moment, because I thought that the fourth-generation iPod nano was only available in 8GB and 16GB variations. And then I saw a 4GB version advertised in the local Wal-Mart flyer.

At first, I figured that it was just a simple typo or the use of the wrong picture. Maybe Wal-Mart was still clearing out 3rd-generation iPod nanos, because those were available in 4GB. Checking the flyer further, I see specific mention of 4th-gen features like shake to shuffle and tilt viewing.

And then it dawned on me. Last month, people spotted some secret 4GB iPod nanos (fourth gen) and an Apple rep told them that this was created for select markets and is not part of the official line. This is why you won’t find a 4GB iPod nano on the Apple website.

We heard that some countries in Europe got these, but now we know that Canada is considered one of those “international markets” that is receiving 4GB nanos. Wal-Mart has them on sale for $129.83. The 8GB and 16GB models can also be found there for $154.83 and $199.83, respectively.