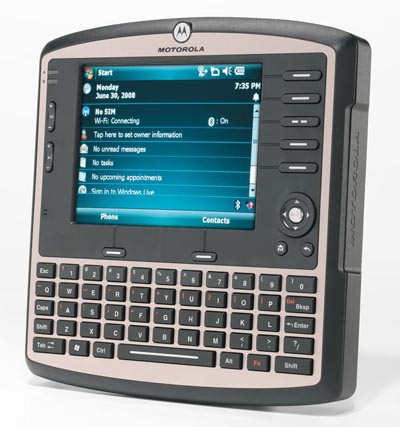 There are some people out there who refuse to carry a cell phone much larger than a RAZR, so there is no way that they would even consider something like the Motorola VC6096 smartphone. Based on appearances alone, this thing has to be at least two or three times the size of a Motorola Q.

Thankfully, the VC6096 is not meant to be a truly mobile smartphone. Instead, the idea behind this Windows Mobile 6.1 Professional device is that it should be permanently mounted in a vehicle, like a taxi cab or freight truck.

Key features on the Motorola VC6096 include integrated GPS and HSDPA, as well as Wi-Fi. Not sure why you’d need Wi-Fi in a moving vehicle, but there you are. Rounding out the specs are military-spec ruggedness, Bluetooth, XScale 624MHz processor, SD slot, and 256MB internal memory. Look for it in Q4 of this year.