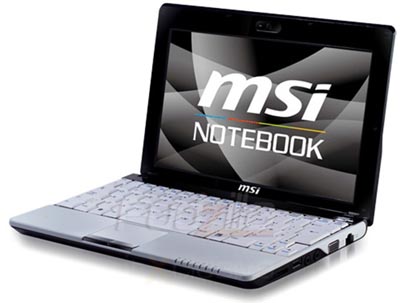 Although it went through some battery issues, the first MSI Wind U100 was quite the nice netbook. The display was adequate, the specs were good, and the keyboard was actually usable. Now that it’s been out for a little while, MSI recognizes that it’s time to provide a suitable successor to its first entry into the subnotebook market.

At first glance, you may think that the new MSI Wind U120 is much like its predecessor, but there is one very notable difference: the inclusion of high-speed 3.5G WWAN. That’s HSPA for those of you keeping score at home. Oh, and MSI has “sharpened up the design” with a couple of minor modifications.

The core of the MSI Wind U120 is much the same as the U100 though, because you get the same Intel Atom processor and 10-inch LCD. Preliminary specs on the U120 also include 120GB HDD (SSD option on the way), 1GBRAM, 802.11n Wi-Fi, memory card slot, and the possibility of WiMAX at some point in the future. Pricing for the MSI Wind U120, which should launch in December, should be south of $600.