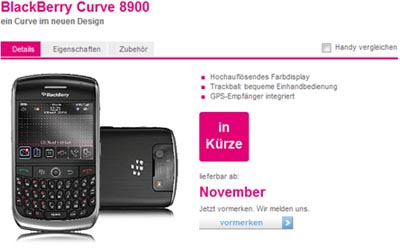 Being sold as the BlackBerry Curve 8900, the once-dubbed Javelin has reared its head on the T-Mobile Germany website. Data comes by way of EDGE and Wi-Fi, so don’t expect to get any HSDPA action there. If you want that, you’ll want the Bold. Other features on the Curve 8900 include GPS, HVGA+ display, and a 3.2 megapixel camera.

The page on the T-Mobile Germany site is saying that the Curve 8900 will launch some time next month, but there is no indication for price. Also know that T-Mo has a tendency to bump launch dates, so November may or may not see the launch of the Javelin.