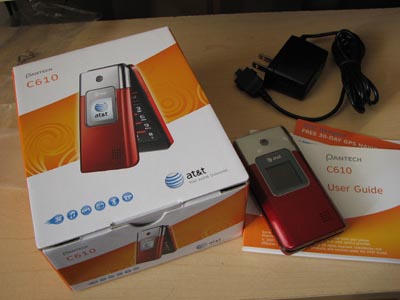 Just because you want to enjoy the high-speed 3G network from AT&T doesn’t mean that you have to get a larger smartphone like the Apple iPhone 3G or the upcoming BlackBerry Bold 9000. Regular Joes can enjoy the extra speedy data connection on a regular looking phone as well and the recently released Pantech C610 clamshell seems to approach this very market. Well, maybe I shouldn’t say Regular Joe because the bright red design of this phone is probably more appealing to the fashion-conscious Janes in the audience.

The courier dropped by my place earlier today and delivered the package containing the Pantech C610 from AT&T. It’s very clear from the packaging that they want to emphasize the high-speed 3G connection and all that orange on the box seems to be a throwback to the Cingular days.

While you may not be using the 3G for viewing full HTML websites, the more robust wireless connection certainly comes in handy for some of the features found on this phone. Let’s have a look at what the Pantech C610 has to offer.

Features At a Glance

Available now from AT&T, the Pantech C610 is priced at a very affordable $49.99, assuming that you’ll sign a two-year contract and deal with the mail-in rebate process. At first glance, the phone doesn’t look all that inspiring, quickly reminding me other budget phones from Samsung and LG. Pantech is Korean as well, so I guess there are certain common design influences there.

Checking out the official page, we discover that the Pantech C610 comes with a built-in music player, AT&T Mobile Music, support for eMusic Mobile and Napster Mobile, a customizable equalizer, MusicID, and a visualizer. That’s on the music front.

Extras? What extras? Cracking open the box to AT&T’s Pantech C610, you will find almost nothing inside the box. The phone is featured prominently, of course, but beyond this, all you get is a wall charger and some basic documentation. Do you want a case? A handsfree set? Maybe a microSD memory card? Well, you’re going to have to provide those yourself.

This is a little unfortunate, but you also have to realize that the Pantech C610 is being marketed as a budget-minded handset that just so happens to have 3G connectivity. I wouldn’t expect the world from this phone and neither should you. 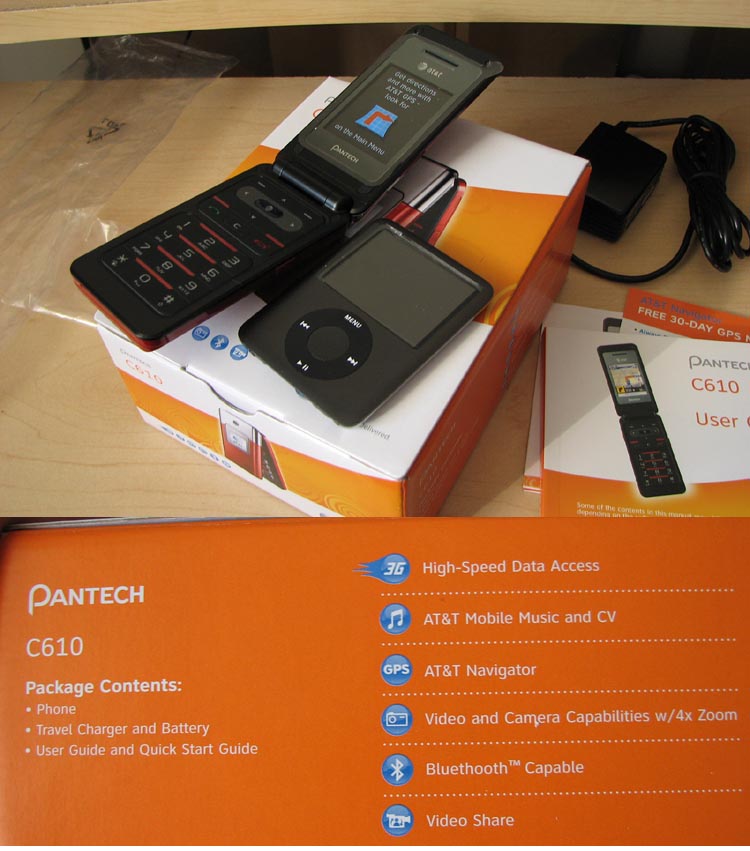 Can someone tell me what exactly “Bluethooth Capable” means? Bluethooth? Seriously? AT&T and Pantech need to hire some proofreaders.

Compared to other entry-level handsets, the Pantech C610 seems to offer a lot more in terms of features. There’s a camera in there, as well as a full featured music player. This is already a step-up from some of the “free with contract” phones out there. At the same time, these features are really starting to become the mainstream. I wouldn’t buy a phone without a camera and, realistically, you may have a hard time finding a phone that doesn’t have a camera.

Build quality appears to be quite good and I appreciate how the microSD slot is easily accessible — along the side of the handset — instead of being shoved behind the battery cover. I did find the protective flaps for the microSD slot and the power port to be a little flimsy, though. I’m not sure if the plastic used is better or worse that rubber coverings.

The outside and inside displays are pretty much par for the course. The bright red exterior may be off-putting for people who prefer more subtle looks to their phones, but the slick black interior is quite attractive. The subtle highlights inside add a touch of style to an otherwise inexpensive phone.

Review on the Way?

I’m not entirely positive whether I will be conducting a full review on the Pantech C610, because for whatever reason, the PR firm never sent me an active SIM card to test this phone. I’m up here in Canada, so it’s not like I have spare AT&T SIM cards booting around. Upon contacting the rep, he said that they couldn’t send active SIM cards; instead, he offered to send a dummy SIM card that would at least grant me access to the menus and the non-communicative features. We’ll see how it goes.