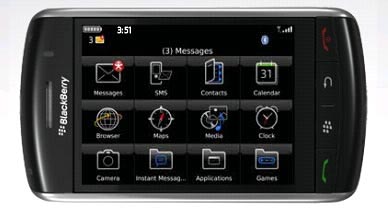 It was reported yesterday that the BlackBerry Storm would be making its official debut tomorrow (which is today) and it seems that all the ducks have lined up in a row, because RIM has officially unleashed its touchscreen wonder onto the world. Yup, Research in Motion has finally put all of those rumors to rest, because here is the BlackBerry Storm.

Along with the announcement of the Storm — some lucky ducks had the opportunity to get a hands-on session with the phone — RIM also released a series of developer tools for creating and testing applications on the newest member of the BlackBerry family. These tools include new versions of the BB Java Development Environment (BlackBerry JDE).

If you can’t wait to get your hands on the BlackBerry Storm and want to give the user interface a quick whirl, there is also a desktop simulator that lets you play with a virtual phone. You can find that at blackberry.com.