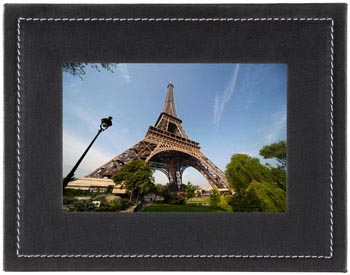 Wouldn’t it be awesome if, while you are on vacation, you could snap pictures of your adventures using your cell phone and have these photos displayed immediately on your digital frame at home? That’s precisely the case with the arrival of the T-Mobile Cameo.

This otherwise nondescript digital picture frame actually has a SIM card slot, effectively letting it receive MMS messages from your mobile phone. Take as many pictures as you’d like and send them to your frame as an MMS. The net result is the near-instant viewing of all your camera phone pictures. Aside from the MMS thing, the T-Mobile Cameo also features a 720×480 display, SD/MMC card slot, and miniUSB port.

The T-Mobile Cameo itself is priced at $100 and the basic MMS service for the included SIM card comes in at $10 a month. Aren’t there Wi-Fi frames out there than can connect to your Flickr photostream? Wouldn’t it be cheaper to make use of an unlimited data plan and take that route instead?