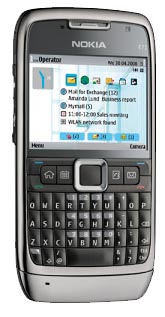 I was actually getting pretty excited about this. While the Windows Mobile thing hasn’t been the biggest success for the dog, I was glad that Fido was moving toward the smartphone market. I don’t think I could ever go back to “dumb” phones again. When I heard that the Nokia E71 was coming to Fido, I thought that they were going to take this smartphone shift a little more seriously. Unfortunately, that has now changed.

While the original rumor (and darn near confirmation) said that the Symbian-powered Nokia E71 smartphone would be going to Fido, it has now been noted that the phone is going to big brother Rogers instead. It’s reasonably clear that they’re trying to send all of the higher-end phones to Rogers, relinquishing the dog to the entry-level market, but this still sucks. Why can’t Fido have any good phones (other than the iPhone)?

Poor, confused puppy… On the one hand, Rogers wants to make you cheap and affordable (like Koodo) with inexpensive handsets. On the other hand, it wants Fido to rake the dough with big plans (FullFido, big iPhone data plans, etc.). You can’t do both, Teddy, unless you start offering more “good” phones through the dog.