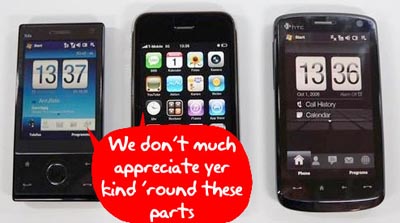 If you’ve been drooling over the high-resolution display on the HTC Touch HD with the rest of us, you may want to take a seat. Unfortunately, it seems that HTC has absolutely no plans to ever bring the Touch HD to the North American market in any form whatsoever.

Yes, we are already able to buy unlocked versions of the HTC Touch Diamond and the HTC Touch Pro around these parts, but I guess the Taiwanese phonemaker assumes that the Touch HD has far more pixels than we can handle. Direct from HTC, the rep said that “by the time we could bring Touch HD to the States, it would be old news. We do have other cool stuff coming.”

The HTC-sourced T-Mobile G1 with Google Android is pretty exciting, but do they plan on shipping a slightly different phone with the same resolution display as the Touch HD? Maybe a Touch HD Pro or something?