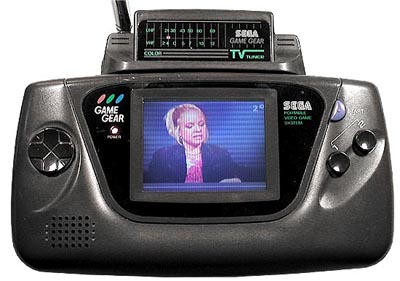 Earlier today, we were introduced to a new handheld entertainment system called the Sega Vision, effectively reintroducing Sega to the hardware market. With this latest development, which apparently has yet to be officially confirmed by anyone at Sega, the once proud video game company could be working to re-establish itself in the industry and re-market itself as not only a leader in Sonic video games, but also in making some physical products as well.

At the same time, you’ve really got to wonder exactly what Sega is trying to accomplish with the Sega Vision. Is this device meant to conquer the same market currently occupied by the Nintendo DS and the Sony PSP (which will soon be joined by the DSi as well), or is it just meant to be a secondary option that people may consider in addition to their standalone portable gaming machnes?

Can Vision Do What Nintendon’t?

As you recall, Sega was once quite the major contender in the world of video games, particularly making a bigger splash on the home console front rather than on the portable front. The Sega Master System wasn’t all that popular, but the Sega Genesis proved to be a worthy adversary to the Super Nintendo Entertainment System (sold in Japan as the Super Famicom). You might even remember some of those classic commercials declaring that the Genesis does what Nintendon’t.

Looking ahead to the pending launch of the Sega Vision, should we be expecting a similar battle between the Sega Vision and the Nintendo DS as we experienced when the Sega Game Gear, complete with a color screen, competed directly against the Game Boy? Or is the Vision something different altogether?

Sega Vision is Not for Gamers

The critical difference, as far as we can tell, is that the Sega Vision is far from being a video game-focused device at all. Instead, it seems to have its sight set more on the PMP market currently occupied by devices from Cowon, Archos, and iRiver. Yes, it’s even trying to compete on the same level as something like the iPod touch.

You see, it doesn’t seem enough to “just” do video games anymore. Sony recognized that a long time ago with the PSP, marketing it a comprehensive entertainment machine. You can use the PSP to watch movies, listen to music, read RSS feeds, keep up with podcasts, and so on. Even Nintendo is doing the same thing with the Nintendo DSi.

The kicker, unfortunately for Sega, is that the Vision can’t compete on the gaming front at all. The PSP and DSi are still bonafide gaming machines, whereas the Sega Vision will reportedly only do some cheap Java-based games. In this way, you’ll get rudimentary versions of Bejeweled and a top-down Metal Gear. Woohoo? Yeah, not really. The Vision is not for gamers at all and the gaming side of things looks more like an afterthought than anything else.

A Triumphant Return or a Failed Effort?

Is this a triumphant return for Sega into the hardware market, even if the Sega Vision is not being geared for gamers? I don’t think so. Yes, the Sega Vision will reportedly do all the PMP things that we’re used to seeing from many PMPs — music, videos, and even mobile TV — but what exactly is going to set it apart? Worse still, Sega isn’t even doing anything creative with the design or implementation, instead rebranding some generic Chinese knockoff as a Sega product. This will hurt the Sega brand more than it will help it.

Mobile television may be interesting, but you have to remember that Sega already tried this with the Game Gear many moons ago. That’s the image that you see above. It was an attachment and it only offered analog signals (which was the going standard at the time anyhow), but you could watch some TV on the go. Presumably, the Sega Vision will offer better television than that (more than) decade-old technology, but it’s still some generic Chinese MP4 player behind that Sega label. I wouldn’t have high hopes.

Sega’s Vision of the Future

Realistically, I have no idea what Sega is trying to accomplish with the Sega Vision. It doesn’t do anything new or revolutionary, other than take Sega even further away from the soul of the video gaming community. We want good games and Sega used to do that (sometimes). The more recent Sonic games have been less than fantastic and if the company thinks that releasing a lacklustre MP4 player will be their knight in shining armor, then they’ve got another thing coming. It’s more like the nail in the coffin.