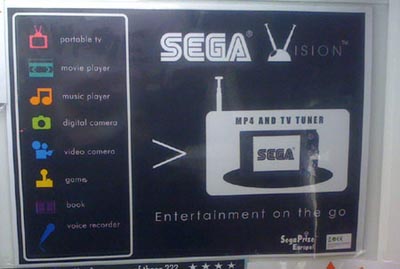 After losing the hardware competition to guys like Sony and Nintendo, Sega fell back into the role of just a software developer, focusing its energies on creating new Sonic the Hedgehog games. Well, it seems that Sega is no longer satisfied with just the software end of things anymore, because the Game Gear and Genesis maker is jumping back into hardware.

No, Sega is not re-entering the home console market just yet, but it is expressing serious interest in the emerging portable entertainment market currently populated by devices like the Sony PSP and Nintendo DS. That said, the new Sega Vision is not a dedicated game machine. Instead, it functions more like a PMP, offering portable TV, movie watching, music playing, and an eBook reader.

The Sega Vision does have games, but it’s not in the same league as a DS or PSP title. Instead, you get rudimentary Java-based games that probably aren’t much better than what you get on a cell phone. Worse yet, Sega isn’t even making the Sega Vision itself, instead rebranding some crappy Chinese MP4 player as its own.