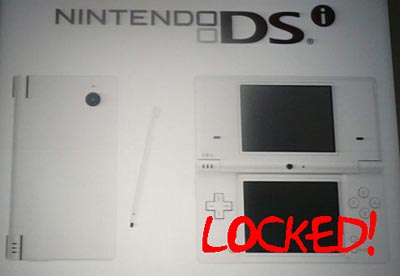 Nintendo announced the Nintendo DSi last week and everyone got all excited about the dual cameras, SD expansion slot, music player, and integrated DSiWare store. It sounded so great and it sounded even better than the DSi would be made available in about a month. The bad news was that it would only launch in Japan and North America wouldn’t get it until well into next year.

Nintendo fanboys being who they are, many hoped that they would simply be able to nab an imported Nintendo DSi and be ahead of the curve. Unfortunately, they’re going to run into a rather massive roadblock. As it turns out the DSi that is launching next month in Japan is region-locked, meaning that it will only play Japanese games. The reverse is also true, meaning that the NA DSi won’t play Japanese games either.

In this way, if you do choose to the import a Japanese Nintendo DSi, you will have to read Japanese and you won’t be able to play your existing American DS cartridges. My Japanese is limited to sushi, sashimi, and ohayo gozaimasu, so I don’t think I can do the import thing. Boo.