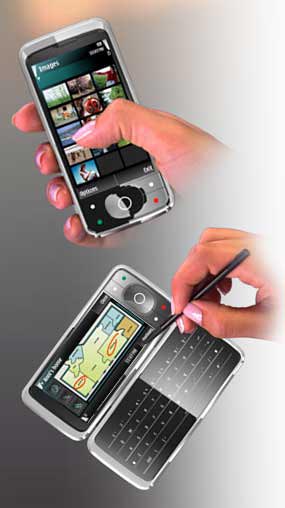 While the newly announced Nokia 5800 XpressMusic (Tube) ushers in a new era of S60 Touch for the company, what they really need is a touchscreen device that can compete a little better with the HTC Touch Pros and BlackBerry Bolds of the world. This concept could be that solution.

The older NOkia E90 Communicator was quite a bit outside of my price range, but at the time that it was released, I felt that it was a great solution for both business users and casual messaging aficionados alike. With the arrival of S60 Touch, Nokia could be in store for a great smartphone that can compete very well against high-end touchscreen smartphones.

It’s still a concept at this point and Nokia is still looking for feedback from the industry experts, but I really like this touchscreen-equipped version of the Nokia E90 Communicator.

It’ll surely have a different name if it ever makes it to market, but you get effectively the same thing as the old E90, except the front part features a large touchscreen instead. The inner display can be a touchscreen as well, but I would like the see the QWERTY as a physical keyboard. Three touchscreens would be a bit much, but that’s what this concept seems to depict.