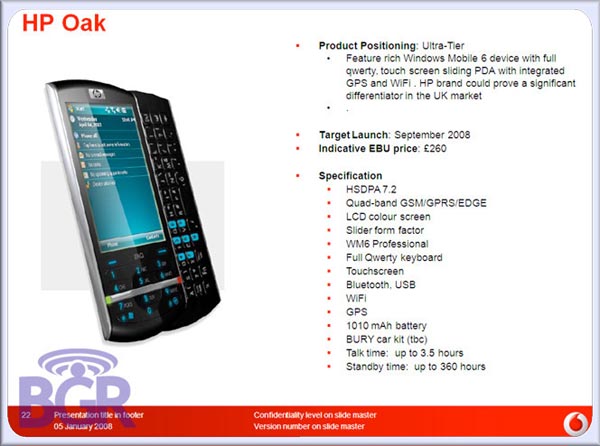 Get a load of this. HTC isn’t the only company that knows how to produce Windows Mobile smartphones that happen to have horizontally-sliding QWERTY keyboards. Hewlett Packard’s line of handsets may not be quite as popular as the older iPAQs may have been, but this new HP Oak could certainly attract some attention.

Set to be released some time in the next two months, the HP Oak will be powered by Windows Mobile 6.1 and get loaded with quad-band GSM, HSDPA 7.2Mbps, full QWERTY keyboard, touchscreen LCD, Bluetooth, WiFi, and GPS. I’m not entirely sure if that numeric keypad is a physical keypad or a virtual on-screen one.

HP may not be alone in its renewed interest in WinMo smartphones, because there are reports of both Dell and Acer working on smartphones too. HTC had better watch out.