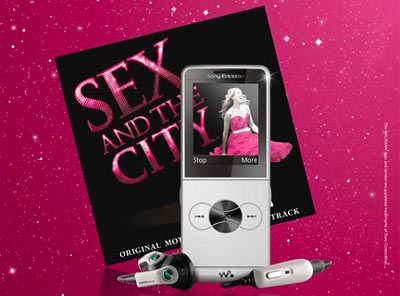 The Sony Ericsson W350i has only been out for a relatively short while, but I guess they already are feeling inclined to bump those sales a little bit by offering a special edition. Although it is a little late to coincide with the movie, you can soon grab a limited edition Sex and the City Sony Ericsson W350i cell phone.

Boasting an ivory white finish, this special Sex and the City edition Walkman phone has much of the same features as its non-limited edition counterparts. That means that you still get an integrated media player, external music controls, 1.3 megapixel camera, and a 1.9-inch display. What sets the Sex and the City edition apart is the preloaded content.

Stuffed into the bundled Memory Stick are an assortment of wallpapers, a video song, and the movie’s official soundtrack. Yup, Carrie would approve.