The actual phone may not be ready for consumer consumption just yet, but that hasn’t stopped some secret ninjas from snapping a series of unboxing pictures of the T-Mobile G1. The first commercially available Google Android smartphone is pretty darn exciting and while we were able to see some hands-on pics, we still want to know what’s included in the box.

The packaging for the T-Mobile G1 doesn’t look all that exciting, somehow reminding of a box for a Samsung Instinct or some other phone. You can also see the very prominent G1 branding on the box, which is surprising. I would think that they’d play up the Google part of the equation, but I guess that’s where the G in G1 enters the picture.

The actual contents of the box are pretty straightforward as well, including an instruction manual, sync cable, headset, and a carrying case. Check out TMoNews for more pics. 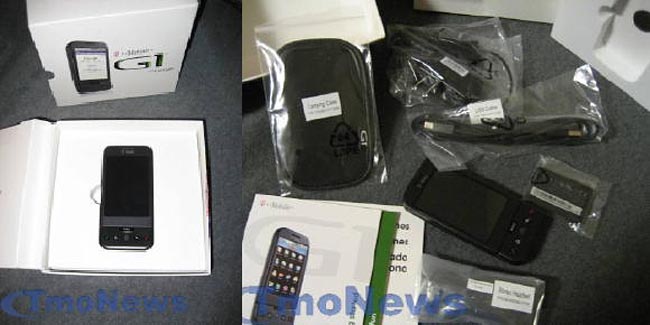