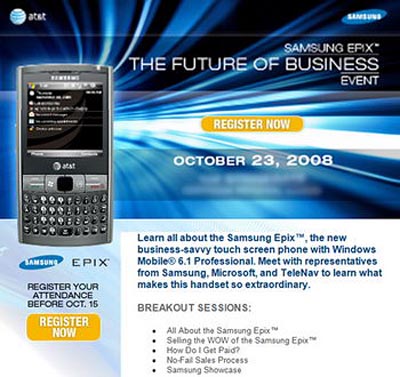 A rose by any other name… We first heard about this upcoming Windows Mobile smartphone as the Samsung BlackJack III. Then we were told that it’s the Samsung i780 in disguise. And now, it seems that the AT&T version is going to be called the Samsung Epix. It’s so epic that they had to replace the C with an X.

The specs on this upcoming phone are pretty impressive and it offers something that no other BlackJack has been been able to offer in the past: a touchscreen display. In this way, you get all the advantages of a touchscreen and the advantages of a physical QWERTY keyboard. That’s pretty cool (but the Centro already does that). Other features include Windows Mobile 6.1 Professional, UMTS/HSDPA, GPS, camera, Bluetooth, and an optical joystick. I just wish the keyboard was better, because I heavily preferred the QWERTY on the Moto Q9h over the BJ2.

Expect the Samsung Epix to sell for $199 with contract and mail-in rebate. The “Future of Business” event is scheduled for October 23, so I imagine that the phone will launch shortly after that.