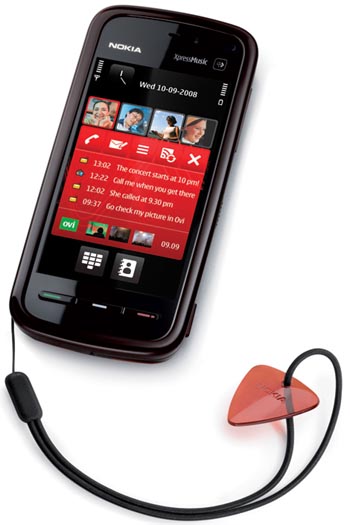 Part of the fun of writing for Mobile Magazine is that I get to keep up with all sorts of cell phone rumors. It gets pretty exciting predicting the prospects for a yet-unannounced handset, because the possibilities are effectively limitless. That’s why when the phones go official, I simultaneously let out a sigh of relief and a growl of disappointment.

We’ve been following the story of the Nokia Tube for some time and now Nokia has officially unveiled the touchscreen multimedia phone as the Nokia 5800 XpressMusic. Just prior to this announcement, most people pegged the handset as the XpressMedia 5800, seeing how it has just as much as a focus on video as it does audio. Go figure.

All three versions of the phone will have quad-band GSM, but one will get 850/1900 WCDMA, another will get 900/2100 CDMA, and the third will lack 3G altogether. Pricing starts at around $400 and a “Comes with Music” version will sell for a little more.