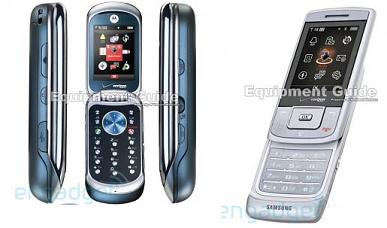 It looks like Verizon will soon have at least two more cell phones in its lineup, but neither seems particularly breathtaking or innovative. They’re just more of the same, if you ask me.

First up is the Motorola Rapture, which you may also know as the Motorola VU30. Taking on a form factor that is not unlike the Motorola PEBL line, the Rapture is a roundish clamshell with a 2 megapixel camera, GPS, EVDO, and a touch-sensitive external display. Sign a contract and she’s all yours for $180.

The other phone is the Samsung Sway, a slider phone that seems to borrow some styling cues from the LG Shine. Notable features include a 2 megapixel camera, slim profile, and the possible lack of high-speed EVDO data. I hope you don’t plan on doing any heavy surfing on this slider. Expect to pay $120 with contract. Both the Samsung Sway and Motorola Rapture are set to launch this coming Monday.