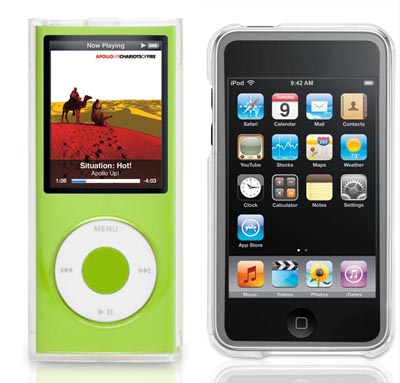 Now that you can walk into your local Apple Store and nab a new fourth-gen iPod nano or a second-gen iPod touch, you probably want to grab a protective case for that new portable entertainment device too. Griffin is a company that has long since ensconced itself in the iPod accessory market, so it’s not at all surprising that they’re offering a full collection of protective cases for the new iPods too.

Made available for the iPod nano 4G, the iPod touch 2G, and the existing iPod classic are no fewer than four kinds of cases. They’ve got the Elan Form with EasyDock, a hard-shell leather case with a no-clip design; the FlexScreen, which protects the entire face of your nano with a clear polycarbonate shield; the Reflect, which offers a mirrored chrome finish; and the iClear with Belt Clip and Armband, a clear case with a removable swiveling belt clip.