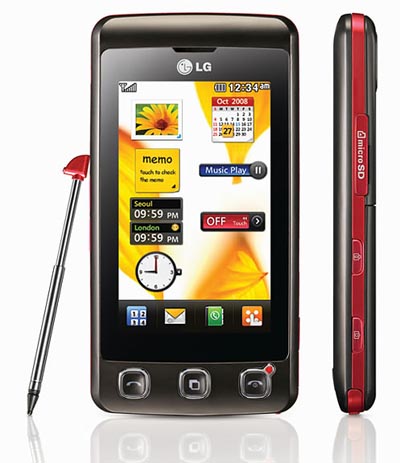 Are you jealous of your friend who is booting around town on his Apple iPhone 3G? Green with envy over your buddy who owns an HTC Touch Diamond? Did you know that you can get in on the touchscreen phone action without breaking the bank? No, I’m not even talking about the previous generation of touchscreen phones like the original HTC Touch. Instead, LG is entering the entry-level touchscreen market with the new LG KP500.

As appears to be all the rage these days, the LG KP500 takes on the candybar form factor that lacks a conventional keypad, opting instead of a full touchscreen user interface. This falls in line with devices like the LG Vu and the upcoming Nokia Tube. Among the features on the KP500 are an embedded stylus, virtual QWERTY keyboard, 3-inch touchscreen, auto-rotating display, document viewer, and support for high-speed 3G data.

Look for the LG KP500 to launch in Europe next month with the rest of the world to follow. Price is still forthcoming.