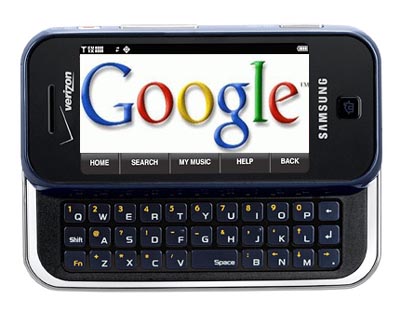 The T-Mobile G1 with Google has arrived, ushering in a whole new era of Android smartphone goodness. While the official announcement may have finally put some ancient rumours to rest, not everything has been completely determined for Google Android just yet. It’s still in its relative infancy and it’s still got a lot of growing up to do. Naturally, the HTC Dream G1 is not the be-all and end-all of Google Android phones either.

Earlier today we heard rumours about Motorola and Nokia working on a Google phone or two of their own, but those aren’t the only major manufacturers who have been connected to Android. All it takes is a quick shot back in time and across the water to find Samsung in Korea.

The Samsung Google Phone of 2007

Before we knew the Google smartphone platform as Android, people simply referred to the related handsets as Google phones, GooPhones, or gPhones. It was around this time that we caught the first glance of a Samsung Google Phone concept, which you can see below. You can also check out my thoughts at the time by hitting up Beyond the Rhetoric. I thought that the phone has some Nokia-esque tendencies to it, but the rumormongers assured me that the slim slider was a Samsung creation.

Sure, it has some classic Samsung things going on. You’ll quickly notice the piano black finish, for example, as well as the delectably slim profile. This was before we saw the HTC Touch Diamond and HTC Touch Pro, remember. Although the slide mechanism was different, we also knew that Samsung had a thing for sliders as well. We couldn’t really get a good view of the operating system, but that’s mostly because it wasn’t even close to being completed yet.

Unlikely, but can you imagine if you did? There’s also a distinct possibility that an HTC engineer caught wind of the leaked concept picture and was inspired by the creative use of the horizontal sliding mechanism.

Now, it’s not like HTC is foreign to the concept of sliding QWERTY keyboards. In fact, the T-Mobile MDA (HTC Wizard) that I am using to compose this post has a slide-out QWERTY keyboard. The difference, as you can quite plainly see, is that not the entire front face slides off to the side. Instead, the core face buttons — talk, end, etc. — stay perfectly put. You could almost say that it looks like the sidekick, but the upper part of the phone (which becomes the left side when held in landscape mode) doesn’t stay put.

This is a pretty unique design and one that is far from common in the smartphone arena. While the Samsung concept seems to have a circular directional pad (or something) on the left and some buttons on the right, and the HTC Dream G1 does not, you can’t deny the overall similarities in the design cues. They’re pretty darn similar.

Will Samsung Make a Google Phone?

If you take a quick look at the official Open Handset Alliance website, you’ll note that in addition to HTC, Samsung also happens to be a member of the OHA. Motorola and LG are members as well. This is a heavy indicator that Samsung is seriously interested in Google Android and there’s a good chance that the Korean electronics giant will dabble in Google’s platform at some point in the near future.

It seems that Samsung has no trouble trying out new operating systems, having already developed smartphones that use Windows Mobile and Symbian. Adding Android to the portfolio would be a natural fit. I just hope that this innovative designer comes up with a design concept that’s different enough from the T-Mobile G1 as to not draw too many comparisons.