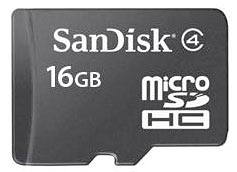 Even though it seems like SanDisk doesn’t know it yet, the company’s much-anticipated 16 gigabyte entry into the microSDHC memory card game has officially been launched into the public. As you can imagine, tossing 16GB into a package that is about the same size as a fingernail is no small feat (no pun intended).

Many smartphones these days make use of the microSDHC format for memory expansion, but I’m not sure if all of them will be able to read the higher 16GB capacity without a proper firmware upgrade. After said upgrade is provided, however, you can effectively give some of those HTC smartphones the same kind of musical and video capacity as something like the iPhone 3G, the latter of which comes with built-in memory instead.

SanDisk hasn’t started advertising the 16GB microSDHC card, but it’s available through a number of online retailers for between $60 and $80. Not a bad deal for that much space.