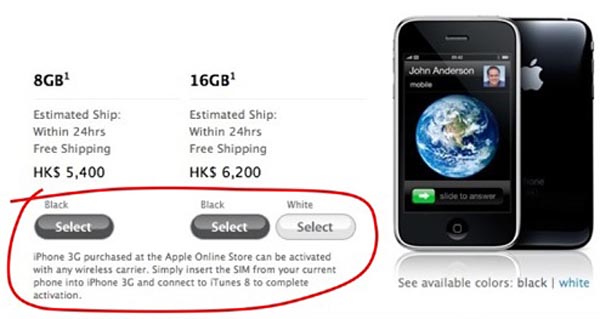 The cell phone industry in Hong Kong has it right: hardware and service are two separate things and should be sold as such. While you must sign a contract to get your hands on an iPhone 3G around these parts, it is possible to pick up an unlocked iPhone 3G from the official Apple Store in Hong Kong without any kind of service agreement whatsoever.

No, we’re not talking about those shady dealers that hang out in Hong Kong’s back alleys. We’re talking about the real deal Apple Store, Hong Kong division. If you take a look at the Hong Kong Apple Store, you’ll discover the gem of a footnote proclaiming that the iPhone “can be activated with any wireless carrier. Simply insert the SIM from your current phone into iPhone 3G and connect to iTunes 8 to complete activation.”

As you can imagine, the unlocked sans-contract version of the iPhone 3G comes at a premium over the subsidized with-contract version that we get here. The 8GB and 16GB sell for about $700 and $800, respectively, pricing it at around the same range as an unlocked HTC Touch Diamond.