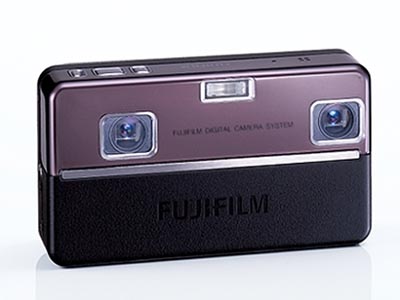 The digital camera market is highly competitive and all the different manufacturers are trying to do something to separate themselves from the pack. Some are upping the megapixel count, others are offering HD video, and others still pop in interesting facial recognition software. Fujifilm is doing something completely different by developing the world’s first digital camera capable of producing three-dimensional pictures.

As you can notice from the (two-dimensional) photo provided, the yet unnamed camera from Fujifilm boasts not one but two lenses. This is so that it can figure out the relative distance of various objects in the scene, effectively placing them in a three-dimensional space. All users have to do to capture a 3D picture is to press the shutter button.

The Fujifilm FinePix Real 3D System will make its official debut in a commercially available camera next year. Naturally, you’ll need to have an appropriately-equipped 3D image display to see the 3D images properly.