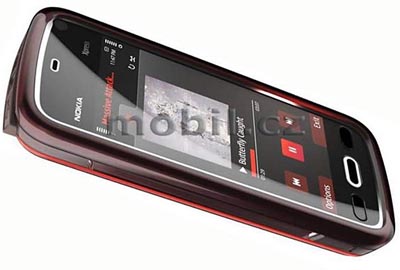 Everyone seems to be cashing in on the touchscreen phone market these days, so it only makes sense that the world’s largest phonemaker would want a piece of the pie as well. We’ve already heard all sorts of rumors surrounding the Nokia Tube, but it seems we now have an official press photo of the phone and it’s been bandied around as the 5800 XpressMedia.

Many of the phones from the Nokia 5000-series fall under the XpressMusic moniker, but the difference with the Nokia Tube is that it’s heavily designed for video entertainment as well. That would explain why it’s being named the Nokia 5800 XpressMedia. It’s hard to say if this is the real deal, but it looks awfully convincing.

Specs include a 3.2-inch touchscreen (640 x 360 pixels), 3.2 megapixel camera, VGA video recording, Bluetooth, Wi-Fi, GPS, quad-band GSM, Symbian S60 Taco 5.0 OS, 150MB internal memory, and microSD expansion. The current rumormongers are saying that Nokia will officially unveil the 5800 XpressMedia in London on October 2. A proper launch would then follow by the end of this year or early next year.