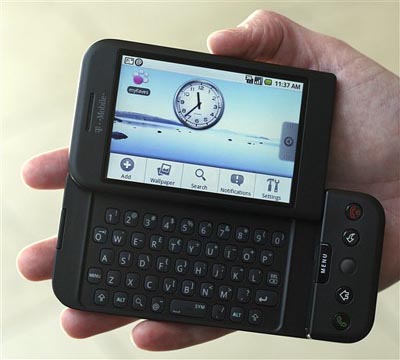 You may have heard about a little phone that was announced earlier this week and how it could have the potential to revolutionize the mobile phone market. What was it called again? Ah yes, the T-Mobile G1 with Google. The hardware itself isn’t particularly revolutionary, but the operating system found within could represent all sorts of possibilities. Google Android is open-source and it comes with the backing of the world’s largest search engine, not to mention the ease with which it should integrate with the rest of the Google portfolio.

Much like what the App Store is able to provide to the Apple iPhone, the Android Market can serve as an excellent place to expand upon the functionality of any Google Android phone. Yes, it’s just the HTC Dream G1 for now, but Sprint is getting an Android phone later this year and several other smartphones powered by Google Android are sure to follow. The development community is sure to gobble this up.

With the “free-for-all” format of the Android Market, we could be in store for a huge range of applications. It’s hard to even begin to fathom what applications people will invent for the smartphone operating system, but I’m willing to stick my neck out and request a few possible projects for anyone looking to create something I’d want to download and/or purchase.

Many people would argue that the best application ever released through the iPhone App Store had to be NetShare. Too bad the guys in Cupertino decided that its functionality was a bit fat no-no, so they had to pull it from the store. Seeing how the Android Marketplace doesn’t have this kind of moderation and approval process, a similar application for the T-Mobile G1 would be an instant hit.

For those of you who have been living under a rock (and didn’t have access to an iPhone while under said rock), NetShare effectively took the 3G connection of the iPhone 3G and transformed the handset into a roaming Wi-Fi hotspot. In effect, if you had any notebooks in the area, they could gain “free” Internet access. The iPhone became a modem and a router without any physical tethering. Wouldn’t it be awesome if they could do the same with the HTC Dream G1? I’d say so.

Gaming is important. I like playing video games, whether it be waggling a remote in front of the Nintendo Wii or wailing on a set of drums in Rock Band. We probably shouldn’t expect a Google Android phone to run any DS or PSP games, but the retro-minded among us will certainly appreciate the nostalgic value of an NES or SNES emulator.

Legal issues aside, wouldn’t it absolutely amazing if you could tote around a perfectly portable version of Double Dragon, Contra, Dr. Mario, and Rygar? It’s probably not a good idea to try to port Duck Hunt and Gyromite, but an NES emulator would be awesome. With the slide-out QWERTY keyboard, you could effectively map the directional pad to the WSAD format, sending the A and B buttons to J and K or something. This is potentially better than the iPhone where the on-screen controls obscure your view.

The T-Mobile G1 is going to come with some great integration with Gmail, so it’s perfectly understandable that we’d be able to get our hands on better integration with all sorts of Google services. I fully expect the Chrome Lite web browser to have Google as its default search engine, for example.

While not everyone has jumped on the bandwagon yet, wouldn’t it be great if there was an application that offered direct and user-friendly access to Google Documents? After all, Android is supposed to have proper cut-and-paste and everything. This would come in very handy for business users too, because any changes made would be seen instantly by others who have access to the same online docs.

Somehow, I’ve become a bit of a Twitter freak these past few months and it’s been a great way for me to interact with other like-minded individuals. Working from home, Twitter can offer a similar environment as the water cooler in the office, except I happen to be hanging out with hundreds of other “co-workers” rather than just two or three.

The iPhone has Twitter apps. BlackBerry guys have Twitter too. It only makes sense that a similarly powerful Twitter client be developed for Android. Continuing on the communication front, you can probably expect apps for things like Windows Live Messenger, AIM, GTalk, and so on… assuming that they are all possible.

It’s sad, really, that both of these functions are not natively available on the T-Mobile G1. Google says that the community will pick up the pieces on this front and I fully expect the community of developers to do so. Give that 3MP camera the ability to record VGA videos at a decent framerate and then let us actually view those videos on the glorious touchscreen display. It would also be great if the Chrome Lite web browser could natively play YouTube videos, rather than having to go through a separate Java and Flash-friendly application.