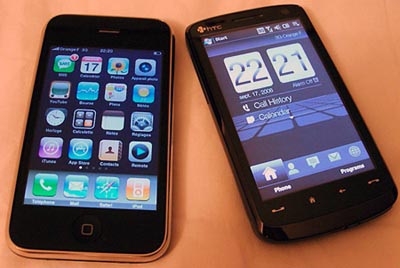 When you see photos of various new cell phones online, it can be difficult to get an exact grasp on their dimensions. That’s why side-by-side comparisons like this one are so important. We were introduced to the HTC Touch HD a very short while ago and now the hot new smartphone has already been compared directly to Cupertino’s offering.

What you see here, as you can probably guess, is the Apple iPhone 3G placed next to the HTC Touch HD. As you may recall, the HTC Touch HD is one of the latest additions to the Touch line of Windows Mobile smartphones from HTC and it boasts an incredible WVGA touchscreen display. In terms of physical size, however, it’s pretty much identical to the iPhone 3G in every way.

The only notable difference is that the iPhone 3G has that curvy backside going on, whereas the HTC Touch HD is a little more conventional in its behind.