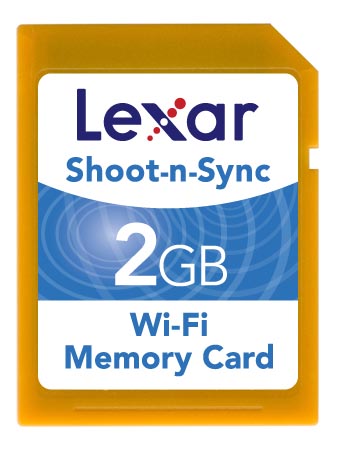 It’s not like the WiFi-equipped Eye-Fi SD card is anything particularly new, but some consumers (and retailers) may be hesitant to pick up a product from an unfamiliar company. That’s why it’s such great news today for the people behind the Eye-Fi card that they have established a relationship with a premier flash memory manufacturer.

Lexar Media has announced that it has partnered up with the developers of Eye-Fi to make a Wi-Fi connected 2GB SD card and it will be called Shoot-N-Sync. This follows a statement released way back in January that the two firms would be working together on something, so it was a long time coming.

The Shoot-N-Sync Wi-Fi SD card has not received an official class rating, but modest estimates place it at at least a Class 2. In any case, it means that you can transfer pics wirelessly from your camera to your computer. That’s pretty handy, I’d say.

UPDATE 9/21: I just got a note Lexar’s PR rep and he provided me with the real picture of the Lexar Shoot-N-Sync card. The previous picture was that of the Eye-Fi card.