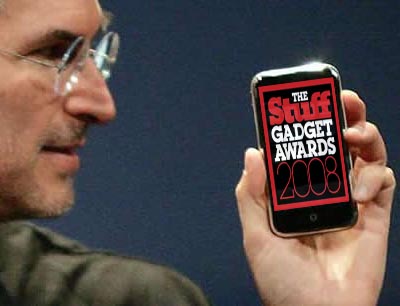 Even though we’ve got over three months to go in the calendar year, Stuff Magazine has already declared what it considers to the Gadget of the Year for 2008. Well, it’s not that Stuff Magazine decided, because the mag left it up to its readers to vote.

No, the winner is not a netbook, despite the flood of those things that we experienced in 2008. The winner, as determined by Stuff’s readers, is none other than the Apple iPhone 3G. Steve Jobs couldn’t be happier. The touchtastic mobile phone bested other notable candidates, including Wii Fit and B&W’s Zeppelin iPod speakers. Somehow, the Xbox 360 and PS3 were also in contention, despite not being released in 2008.

The editors at Stuff Magazine did not agree with the readers, choosing the Asus Eee PC as the gadget of the year instead.