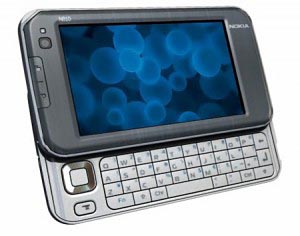 Given the rising popularity of subnotebooks, Nokia has an excellent opportunity to capitalize with its more compact N800-series Internet tablets. It’s been a while since that sliding web surfer got an update, so it’s good to hear that a fresh version is in the works with some notable upgrades.

For starters, the yet-unnamed Nokia Internet Tablet (N820?) will get a new TI OMAP 3 processor, allowing it to execute 1200 million instructions per seconds. There’s also an integrated accelerator to handle HD-capable imaging, video, and audio. Connectivity options get covered by way of Wi-Fi as before, as well as 3G HSDPA. Unfortunately, there’s no mention of WiMAX.

We expect the new Nokia Internet tablet to look similar to the N800 and N810, but Nokia might throw a curveball our way instead. In any case, they’ve got to hurry up if they want to capitalize on this market.