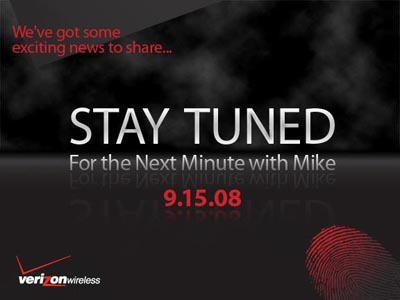 A special email message was sent out over the weekend from Verizon Wireless and it appears to point toward the launch of the BlackBerry Storm, which you may also know as the Thunder, some time today. Well, it may necessarily be the launch, per se, but it could be the official acknowledgment in the fact that Verizon Wireless will be the first North American carrier to pick up the first touchscreen-equipped BlackBerry from Research in Motion.

As you can tell from the image provided, Verizon didn’t exactly supply people with very much information, but the date and the styling is rightin line with potential unveiling of the Verizon Wireless BlackBerry Thunder Storm touchscreen smartphone. It’s the coming of the Storm and early predictions have the official release coming around November 1.

Right now, verizonwireless.com/storm leads you to a 404 page error, but the page should launch a little later today with some more specific information. Exciting times ahead!