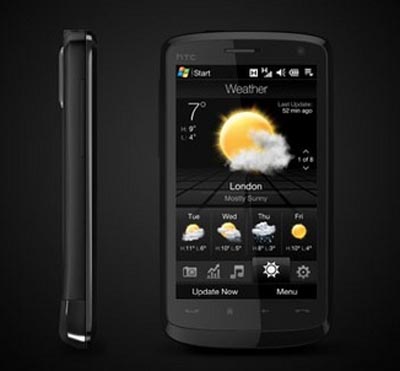 We caught some spy shots of the HTC Touch HD last week, but we weren’t completely certain whether this high-resolution smartphone was for real. Well, it’s definitely for real and the official glamour shots are simply gorgeous. The good people at HTC officially unveiled the HTC Touch HD today, showing off its incredible WVGA (800×480) touchscreen display in all its glory.

A bevy of official promotional shots are available through the HTC website, but you can get a pretty good glance it through the photo that I have here as well. In effect, you get a phone that appears to be quite similar to the HTC Touch Diamond, except in a slightly different shape and with a higher resolution display. The official spec sheet was also announced, confirming details like GPS, Wi-Fi, TouchFLO 3D, dual cameras, Bluetooth 2.0+EDR, and Windows Mobile 6.1 Professional.

The bad news is the HSPA is only 900/2100, so there’s no 3G love for North America just yet. That’s because the HTC Touch HD is being introduced first to major European carriers during Q4 2008. “Other global markets” will follow “shortly” and that’s presumably when a NA-friendly model will be created too.