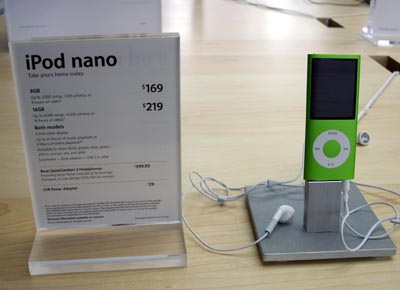 By now, you’ve surely heard about the Let’s Rock event that Apple held in San Francisco last week. They were really pumping up this gathering and press conference to be something rather monumental and while some people were disappointed to not see a new MacBook (that should be happening at the next Apple event in the fall), music fans got treated to an updated iPod touch and the fourth-generation iPod nano.

Since I heard that Best Buy didn’t have them yet, I decided to take a quick jaunt over to a brick-and-mortar store that just might have the new music and video players in stock. Seeing how the Apple website is already selling the new iPod nano, I figured that the physical stores would be selling them too. And I was right. Heading over to the local mall, I waltzed into the Apple Store and the first counter that hit me on the right contained the new iPod nano in every color available.

Being the proud owner of a third-generation iPod nano, I figured that the new nano would be much the same, except in not so chubby a form factor and with a portrait-oriented display. The first thing that struck me about the new iPod nano is that it’s smaller than it looks in pictures. This is partly to do with the elongated body and vertical display of the new nano, which is a distinct departure from the first three generations.

Because of the curved body, the fourth-gen iPod nano also feels like it’s quite a bit thinner than previous nanos. Yes, this is technically the thinnest iPod created to date and it really feels the part. The dimensions are a little deceiving, because it’s chubbier in the middle and it tapers off to the sides, but you get the subjective experience of an incredible thin nano.

The display is exactly the same size and resolution as the third-generation iPod nano, except it has been turned vertically. Don’t worry. When it comes to watching videos, you can just turn the nano sideways and the integrated accelerometer will automatically rotate the display into landscape mode for you. This auto-rotation wasn’t quite as speedy as I had hoped, but it’s not really any slower than the auto-rotation on the iPod touch or iPhone.

Because the display has been rotated, the crew in Cupertino had to make some changes to the user interface to accommodate. Having the split-screen effect introduced in the third-gen nano simply would not work, so what you get now is an elongated playlist and no funky graphics off to the side. It’s a little simpler and I think it’s an improvement. You are able to see more items at once, which is a definite plus. When the nano is turned sideways, you can also make use of a tilting Cover Flow interaction, but this feature didn’t work quite as well for me.

Also making use of the accelerometer, the same one found in the iPhone, is the new “shake to shuffle” feature. When you are listening to some music, you can give the iPod nano a good shake and it will automatically pick another song at random. This works whether you shake the nano left and right or if you shake it up and down. Just like the auto-rotation, there is a slight delay in its response, taking about a second before a new track pops up. Note that the shake to shuffle feature is deactivated when you have the hold switch activated or if the screen is off.

I’m not so certain that the new fourth-gen iPod nano is actually much of an improvement over the third-gen. Unlike a lot of other people, I don’t mind the “chubby” form factor of the third-gen. That said, I like the inclusion of the accelerometer if only for novelty’s sake. Aside from that, it’s just a slight change in shape for 4G.

Even though Apple wants to sell me an iPod every year, I don’t think I’m going to bite. There are still areas where the iPod nano can improve. For example, the introduction of the curved display bothers me. Yes, it makes for a slick appearance, but it also opens you up to a fair bit of glare. Thankfully, the display is nice and bright. The curved shape also creates for somewhat sharp edges on the top and bottom, which can’t be good for younger children (or an unfortunate shuffle in your pants pocket).

With the switch to a vertical display, the new iPod nano just looks longer than the first or second gen, even if it has a similar footprint. There is quite a bit of space between the display and the scroll wheel, so Apple could make a more compact iPod by reducing this gap. Oh, and you’ll also note that the hold switch has been relocated back to the top of the nano, rather than the bottom where it lies for the third-gen.