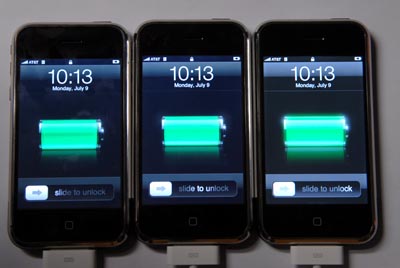 With a rising concern over global climate change, one of the most pressing issues facing us to today has to do with sustainability and how we interact with Mother Earth. It’s easy to turn to the automobile world and consider all the technologies behind hybrids, hydrogen cars, full electrics, clean diesels, and all that other jazz, but there is at least one other area where we could do a lot better for the environment. It’s something that you probably use each and every day, and it’s something that is contributing a lot to our landfills. I speak, of course, of mobile phones.

In addition to possible concerns over cancer and other negative effects of cellular phones, you must also consider the environmental ramifications of those chemicals leeching into landfills. They don’t break down very well and they easily leech in our groundwater, which may also be the water that you drink from the tap. Not good. Also consider all the power that you consume over the course of a year to power your mobile phone. How many times do you charge it? How much electricity are you using?

Generally speaking, cell phones contain some rather nasty things and you don’t want these in our landfills. They are potentially harmful to the environment and it would be ideal if the manufacturers could make use of materials that can be returned to the Earth in a less harmful matter. Certain companies are already working toward this goal, but much more progress can still be made.

One theoretical example is the unique Bamboo phone. Despite its name, this handset is not made of the stuff that pandas like to munch on. Instead, the concept phone is made largely of bio-plastic that has been developed from natural resources like corn. This way, the phone can be shoved into the compost with the rest of your kitchen scraps and it will disintegrate alongside your potato peelings and apple cores. The print board, battery, and antenna are all biodegradable.

Slimming Down on Features

As I’m sure you’ve noticed, cell phones are used for a lot more than just voice conversations these days. They’re also our digital cameras, portable music players, GPS navigators, web surfers, instant messengers… the list goes on and on. With the arrival of all of these features, however, mobile phones have also become much larger power hogs. There are certain efficiencies that have been achieved, but by disabling certain features, you can save battery life and, thus, help the environment just a little more by being more efficient.

Yes, I know that this is a difficult sacrifice for cell phone enthusiasts. I’m a gadget geek too, but I’m not saying that you need to get rid of the features altogether. They just have to have a more efficient design. For example, it would be better for the environment (and your level of frustration) if devices like the Apple iPhone came with the WiFi, Bluetooth, GPS, and other similar items de-activated by default. In fact, wouldn’t it be great if the phone could be configured in such a way that these only activated when you actually needed them? So many people leave Bluetooth on accidentally and drain their batteries as a result.

We’ve seen plenty of smartphones, so it’s about time that the use of wireless radios and other features is a little “smarter” too.

Alright, maybe you want to leave that WiFi on all the time so that you can minimize some of your cellular data bandwidth. Maybe you’ve come to rely on the GPS navigation offered by your cell phone. If this is the case, perhaps a better solution would be something that simply lets you charge your battery in a greener fashion. Plugging it into the wall all the time still has certain inefficiencies, and depending on where you live, some displaced pollution.

Even if the phone itself isn’t green-powered, there are possibilities to go green. There’s a solar case for the iPhone, for example, that draws its juice from the sun. There’s also a charger that is based on bicycle power. The possibilities are limitless.

Going into the conceptual range, you’ll find green phones that make use of kinetic energy, solar power, and more. Just having it bounce around in your purse or pocket could provide a fair bit of power. Wouldn’t it be nice of more mainstream phones had features like this? If the iPhone already has an accelerometer, it’s clear that it understands the movement of the phone. Just translate that to something usable!