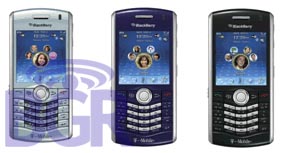 Squint your eyes a little. If you look really carefully at this picture, you may notice that there is something special about this set of BlackBerry Pearl smartphones. No, they don’t come with a wacky new feature set nor do they sparkle with Swarovski crystals, but they offer slightly more personality than their direct predecessors.

That’s because T-Mobile is updating its line of BlackBerry Pearl 8120 smartphones by offering three new color options. On the far left is Frost, a color that a silvery blue of sorts and perfectly suited for the upcoming winter months. The other two phones aren’t black. Instead, they are “Indigo” purple and “Black Emerald” green. I can faintly see the purple, but I’m not noticing the green.

The features remain the same as previous Pearl 8120 phones, meaning you get WiFi, SureType, and a 2.0 megapixel camera. Look for the colorful new trio to arrive on October 15.