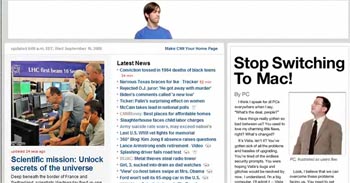 This isn’t the first time that Apple has produced an online advertisement like this, but I still get a kick out of separate ad units “communicating” with one another. The latest ad to hit the Internet has a wide banner at the top of the CNN.com page “talking” to a skyscraper ad along the right side of the same page.

In it, the “I’m a Mac” guy occupies the top part of the page and he talks to the “And I’m a PC” guy who occupies the space in the sidebar. The actual dialogue isn’t all that different from what you see on TV with these ads, but the implementation and creativity certainly warrants some attention. I also like how the PC panel has a fake news article titled “Stop Switching To Mac”, using the PC guy as the embedded image.

Apple certainly is forward-thinking, doing its best to approach audiences who may not be quite as exposed to the ads on TV. Anyways, check it out for yourself.