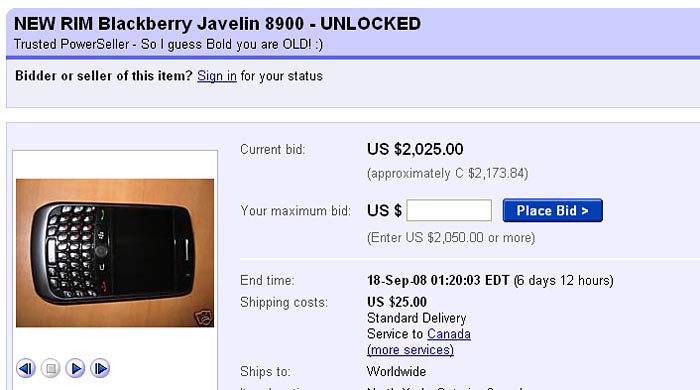 Sometimes, you just can’t wait for an official release and you’re willing to pay just about any price to get your hands on your gadget of choice. Such appears to be the case today with an unlocked BlackBerry Javelin 8900. It’s so new that Research in Motion isn’t even selling the 3G-less cousin of the BlackBerry Bold just yet.

Instead, the only way that you’ll be able to get your hands on the BlackBerry Javelin 8900 is through the wonders of eBay. Some user by the name of “rogersunlocking” has the Javelin up for sale on eBay. Just be aware that this pre-release handheld will come at quite the hefty premium. The starting bid is $899.99, but as you can see from the screenshot below, the bid is already up over the $2,000 mark.

There are over six days left in the auction, so the price can only go up from here. Regarding the legitimacy of the auction, “rogersunlocking” has 99.5% positive ratings from almost 1,000 transactions. I guess you should feel safe, but as with all eBay auctions, caveat emptor. Here’s the auction.