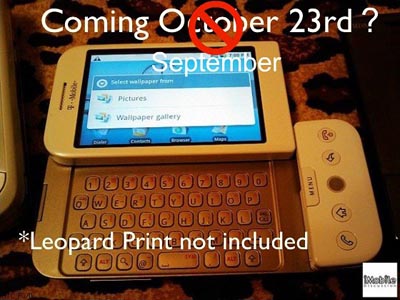 We’ve been sitting on pins and needles for what seems like an eternity, anxiously awaiting the arrival of the first smartphone powered by Google’s Android OS. There have been tons of conceptual sketches, spy pics, and ever UI walkthough videos, but when are we going to get the real thing?

Initial rumors said that the HTC Dream G1, the first Android smartphone, would launch with T-Mobile USA some time in October. It seems that things are actually ahead of schedule and the phone is ready for this month instead. More specifically, current rumors are pointing toward a possible announcement on September 23 by the guys at T-Mobile and Google in New York City.

Bear in mind that September 23rd is the rumored date for an announcement. It’s still perfectly fathomable that the HTC Dream G1 won’t actually launch until October (or later).