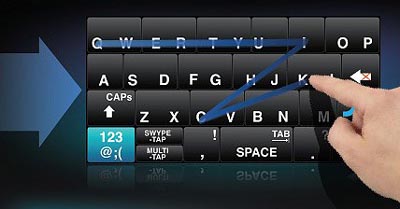 For text message enthusiasts around the world, T9 had to be one of the greatest inventions of all time. Instead of pressing “2” three times to get at the letter “C”, you could just press it once. The system would then predict which letter you needed based on context and the other letters in the word. T9 is great.

While I am personally a fan of physical QWERTY keyboards, other people swear by the touchscreen. Now one of the original creators of T9 predictive text has come up with a text entry system that makes touchscreen keyboards way faster. How much faster? The old fella (who, by his own admission, is not very fast) is capable to typing at 50wpm using this.

Dubbed “Swype”, the system gets you to swipe your finger or your stylus across the virtual keyboard, approximating the word that you would like to spell. You don’t have to be perfectly precise, because Swype will predict your chosen word… just like T9. Perhaps a video is the best way to demonstrate this. Check it out.